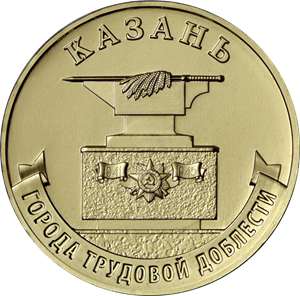 The city of Kazan was awarded the honorary title of the Russian Federation City of Labour Glory for the significant contribution of its residents to the Victory in the 1941–1945 Great Patriotic War, for ensuring the uninterrupted production of military and civilian equipment by industrial enterprises, and large-scale labour heroism and dedication displayed during the War.

During the war years, Kazan became one of the most important rear centres of the Soviet Union. As many as 139 Kazan-based industrial enterprises were put on a war footing. These enterprises produced over 600 types of weapons, ammunition and equipment for the needs of the Red Army ensuring uninterrupted production operations and arms delivery to the front. Every sixth combat aircraft was produced at the aviation factories of Kazan. Thanks to the technical innovations, Sergei Korolyov and Valentin Glushko created the first Russian made liquid propellant jet engine RD-1.

Equipment of the instrument-making plant No. 379 (now the Kazan Electrotechnical Plant) evacuated from Leningrad (now St. Petersburg) was used to produce control instruments needed for the Navy. Optical instruments for the Air Force and Navy, artillery, tanks were manufactured at the Kazan Plant No. 237 (now the Kazan Optical-Mechanical Plant). The Special Technical Bureau invented gunpowder for rockets of the secret Katyusha rocket launcher. During the war years, the plant sent more than 4 billion charges to the front line. Light industry workers produced about 200 clothing types and uniforms for the Red Army soldiers.

As a result of the performance of various Soviet industries during the Great Patriotic War, seven largest enterprises of Kazan received government awards, 14 enterprises were awarded the challenge Red Banner of the Central Committee of the All-Union Communist Party of Bolsheviks and the State Defence Committee of the USSR 144 times.

Over 75,000 people were awarded orders and medals for valorous work during the Great Patriotic War, more than ten people were awarded the title of Hero of Socialist Labour. The significant contribution of Kazan to the Victory in the Great Patriotic War was highly appreciated by the Decree of the Presidium of the Supreme Council of the Union of Soviet Socialist Republics – the city was awarded the Order of Lenin.