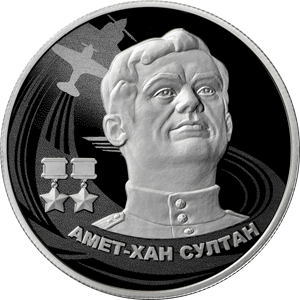 During the Great Patriotic War of 1941–1945, he took part in the battles near Kastornoye and Voronezh, the Battle of Stalingrad, fierce air battles in Kuban, and the liberation of Rostov-on-Don, Taganrog, Melitopol, and the Crimean Peninsula. In the battles near Stalingrad, he proved to be a respected ace and was assigned to the prestigious 9th Guards Fighter Aviation Regiment composed entirely of flying aces to counter Luftwaffe pilots. By that time, Amet-khan Sultan had learnt to detect the enemy before the enemy detected him and rushed at German planes while they did not expect the attack.

For the exemplary performance of the combat missions assigned by the command, courage, bravery and valour displayed in the fight against the Nazi invaders, by the Decree of the Presidium of the Supreme Soviet of the USSR, dated 24 August 1943, Captain Amet-khan Sultan was awarded the title Hero of the Soviet Union, with the Order of Lenin and the Gold Star medal presented to him, for flying 359 combat sorties and participating in 79 aerial battles where he shot down 11 enemy planes personally and 19 more together with his comrades-in-arms.

In total, during the war, Amet-khan Sultan flew 603 combat sorties (including 70 to attack enemy manpower and materiel) and was engaged in 150 aerial battles where he scored 30 solo and 19 shared victories.

In February 1947, he became a test pilot at the Flight Research Institute in Zhukovsky. Very soon, he became one of the best test pilots.

In his career, he mastered almost 100 aircraft types with 4,237 flying hours overall.