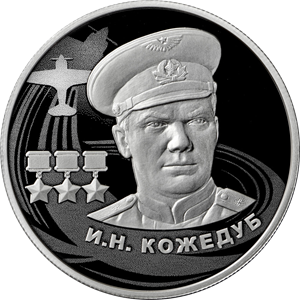 Being a flight instructor, he finally insisted on being assigned to army field forces only in the autumn of 1942. He arrived on the front line in March 1943 and quickly mastered the La-5 single-seat fighter. The Battle of Kursk became the first serious challenge for him. He opened his tally on 6 July 1943 by shooting down a Ju-87 dive bomber. Two days later, he led a flight of four fighters for the first time. In August 1943, he received a promotion to lieutenant and was appointed as a squadron commander.

The combat record of Ivan Kozhedub for 1943 reads that he successfully completed 173 combat sorties, during which he engaged in 52 aerial battles and shot down 25 enemy aircraft. In February 1944, Ivan Kozhedub was awarded the title of Hero of the Soviet Union for personal aerial victories and combat heroism.

Kozhedub’s squadron engaged in the liberation of Kharkov, the battles on the Dnieper River, and the liberation of Right-bank Ukraine, fought in the skies of Moldavia, provided covering fire for the crossings of the Southern Bug and bridgeheads on the right bank of the Dniester.

In July 1944, Kozhedub was assigned as the deputy commander of the 176th Fighter Aviation Regiment which was fighting as part of the 1st Belorussian Front. Before departing for the regiment, he was retrained from the La-5 fighter to the new La-7 aircraft. While at the training airfield near Moscow, on 18 August 1944, Captain Kozhedub received a message that he was awarded the second Gold Star medal.

Kozhedub went down in history as a skilled air fighter who strove to attack the enemy first and seize the initiative. He developed a series of new air combat techniques and methods. Over the course of the war, Kozhedub made 330 sorties, during which he engaged in 120 dogfights and shot down 62 enemy aircraft himself.

For his heroic feats, he became thrice Hero of the Soviet Union on 18 August 1945.

After the war, Kozhedub held senior military positions in the Soviet Air Forces. In 1985, he was promoted to the rank of Marshal of Aviation. Thrice Hero of the Soviet Union Ivan N. Kozhedub received the following awards: two Orders of Lenin, seven Orders of the Red Banner, Order of Alexander Nevsky, Order of the Patriotic War (1st Class), two Orders of the Red Star, Order ‘For Service to the Homeland in the Armed Forces of the USSR’ (3rd and 2nd Classes) and medals, as well as foreign orders and medals.